With Splendour in the Grass now completely sold out, Live Nation is pleased to announce that this year’s festival headliners CHILDISH GAMBINO and SZA, alongside fellow Atlanta hip-hop sensation RUSS, will each play a run of headline sideshows across the country. With the annual Byron Bay festival selling out within a matter of hours, fans will need to move swiftly to secure tickets to some of this year’s most anticipated festival sideshows.

@oddisee and the @goodcompnyband in Australia
THIS WEEK FIRST TIME IN AUSTRALIA WITH HIS BAND!
Melbourne heads really need to get down to this THURSDAY so we can continue to have nice things Tickets at oztix.com.au

More than 40 sensational new acts from over 25 countries were added to WOMADelaide’s already strong 2019 festival line-up today, and the countdown is now on with the festival to be staged from Friday 8 – Monday 11 March in Adelaide’s Botanic Park. Leading the charge – The Original Gypsies (France), featuring key founding members of the legendary 80s group, The Gipsy Kings. Reunited after more than 20 years, their fiery rumbas and furious flamenco will ignite hearts and feet, as they perform their much-loved songs. The intense heat of their music hasn’t dropped a single notch; it’s still fuelled by glorious sandpaper vocals and furiously strummed guitars.

Joining them will be one of the biggest names in modern African music; actress and social activist Fatoumata Diawara (Mali), whose 2011 debut “Fatou” was described by The Guardian as “spellbinding”. In 2018 she has taken her artistry to thrilling heights on her album “Fenfo”, featuring on Disclosure’s new song “Ultimatum” and making the cover of Songlines magazine.

Liz Phair (USA) celebrates the 25th anniversary of her 1993 debut studio album “Exile in Guyville”, ranked by Rolling Stone as one of the 500 Greatest Albums of All Time. Released during the peak of the grunge movement, Phair’s influence in alternative rock – and particularly on female voices in the genre – can still be felt today. In complete contrast, after 30 years of touring the globe, the pioneer of Balkan clubbing, the incendiary Shantel & Bucovina Club Orkestar (Romania/Germany) will perform in Australia for the first time.

WOMADelaide 2019 showcases a plethora of amazing musicians, many of who are masters of stringed instruments; from Amjad Ali Khan (India) & the Adelaide Symphony Orchestra (announced last month) to violinist and loop artist Maarja Nut & Ruum (Estonia), to The Original Gypsies. The lineup also includes the internationally renowned jazz harpist, Alina Bzhezhinska Quartet (Poland/UK) and the first female Kora virtuoso to come from a West African Griot family, Sona Jobarteh (The Gambia). On the flipside, electronic rockers DuOud (Tunisia/Algeria) combine their love of the oud with the latest in technology, and one of Australia’s most lateral thinking and inventive ensembles, Adelaide’s own Zephyr Quartet, will take the stage.

“Only in Adelaide and only at WOMADelaide can audiences experience the sights, sounds and delights of cultures from over 40 countries presented by over 600 artists across 69 groups in one amazing weekend, which also demonstrates why Adelaide is Australia’s only UNESCO City of Music,” said WOMADelaide Director, Ian Scobie.

Marrugeku’s latest dance production, “Le Dernier Appel (The Last Cry)”, featuring a cast from Australia and New Caledonia, explores the challenges of colonisation; what to embrace and what to let fall, to a throbbing soundtrack by artists including Australia’s Ngaiire.

The Australian talent in the program is as rich as ever. Mojo Juju returns to WOMADelaide after three years, with her new album “Native Tongue” seeing her nominated for three ARIA Awards and three The Age Music Victoria Awards. Zimbabwean-born, Melbourne-based soul singer, Thando has also had a stunning year, kicking it off with a powerhouse collaboration with REMI. Bringing her brand of sophisticated folk music is Thelma Plum and enchanting audiences with her honeyed vocals, fierce rhymes and bold style, comes 20-year-old Kaiit.

Off stage, the site performance & installation artists will include Olivier Grossetête (France) who creates ‘collaborative monumental constructions with Ephemeral City. A colossal cardboard archway, towering at over 20 metres, will take shape across the festival weekend with the help of students from the new Adelaide Botanic High School and WOMADelaide audiences.

Compagnie BiLBoBaSSo’s “Amor” (France) combines theatre, dance and pyrotechnics, transforming one couple’s turbulent pathways in love into a stunning, fiery finale. And Le Phun (France) bring The Leafies (Les Pheuillus) – ephemeral human figures made of autumn leaves – to Botanic Park to reflect the spirit of nature as they mysteriously populate the park. Find out more here.

SEASONS GREETINGS! On Sunday the 23rd of December, I’m throwing a massive Christmas Party / Sunday Sesh at my old stomping ground, The Rosie in Perth. We’ve got a seriously stacked lineup of some of Perth’s finest talent; Your Girl Pho, Nfa Jones & Charlie Bucket, Premiss & Hyclass, Marksman Lloyd plus my band and […]

On Sunday the 23rd of December, I’m throwing a massive Christmas Party / Sunday Sesh at my old stomping ground, The Rosie in Perth. We’ve got a seriously stacked lineup of some of Perth’s finest talent; Your Girl Pho, Nfa Jones & Charlie Bucket, Premiss & Hyclass, Marksman Lloyd plus my band and I to finish the night off. It’s set to be a big one. Bring your friends, bring the fam, it’s Christmas! Hope to see you there – Drapht x

Yoyoyo! I’m throwing a CHRISTMAS PARTY at The Rosemount with a bunch of friends!

Southern Comfort today announces the return of Southern Sounds, an all-day cultural celebration of everything New Orleans (NOLA), bringing artists from Australia and NOLA together for a true dose of Southern Hospitality.

Step inside the French Quarter, jazz-bar-inspired space to witness some of Australia’s finest musicians drawing contemporary influences from NOLA’s classic jazz and soul scenes. In the spirit of collaboration, see sets from hip-hop royalty REMI and their full band, alongside Melbourne’s upcoming neo-soul star Kaiit. Joining them, is multi-instrumentalist and self-directed creative Milan Ring, as well as Sydney’s favourite End Notes Big Band. Remi Kolawole and his musical collaborator Sensible J are Australian Music Prize winners and recently worked with Slum Village alumni Black Milk and New Zealand’s Raiza Biza on their forthcoming Black Hole Sun EP, while Papua New Guinea-born, Melbourne-based artist, Kaiit has been named the baby of Jill Scott and Erykah Badu by Jill Scott herself and has sold out shows across the country on her Live From Her Room EP tour.

Inspired by freedom of expression, inclusivity, warmth of southern hospitality, Southern Sounds celebrates all things New Orleans. On December 8, witness one of NOLA’s founding icons of bounce, alongside Australia’s favourite musicians, restaurateurs and drink connoisseurs pay homage to the heritage taste of Southern Comfort and the newest member of the family, Southern Comfort Black.

The wait is finally over! Eminem will grace our shores for four massive Australian stadium shows in Brisbane, Sydney, Melbourne and for the very first time Perth in February 2019. Eminem will also travel to New Zealand performing for the first ever in Wellington in March 2019 – presented by TEG DAINTY.

Eminem’s fiercely loyal Australian fanbase has been willing for tour dates to be added in this territory, constantly spinning the rumour mill into overdrive, and now their prayers have been answered: the rap god is on his way, special guests will be announced soon and join the line-up for this second instalment of the RAPTURE 2019 stadium tour.

Tickets to Eminem’s Rapture Tour are on sale now from Ticketek.

A VISA cardholder pre-sale was available from 10am on Wednesday 17 October through to 10am Friday 19 October. Eminem’s live show illustrates exactly why he remains the “greatest in the world” of hip-hop. The Detroit rap icon’s rapid-fire flow, expansive phrasing and acerbic lyrics are awe-inspiring to witness live.

On Eminem’s 2018 headline Coachella set, Rolling Stone gushed, “Everything that made Slim Shady one of the most essential voices of his generation was onstage this weekend.”

When the 15-time Grammy award winner and biggest-selling rapper of all time dropped his surprise tenth studio album ‘Kamikaze’, unannounced, on 31 August this year it was impossible to ignore, flying straight to #1 on the Australian Albums chart where it retained pole position for four consecutive weeks, becoming the MC’s ninth chart-topping album in this country. And the record-breaking rapper just keeps on racking up the accolades. ‘Killshot’, Eminem’s standalone single, scored the highest 24-hour YouTube debut for a hip-hop video (the third-highest music video debut overall) upon its release last month.

Eminem’s previous Australian visit for 2014’s Rapture Tour thrilled audiences at sold-out stadiums across the country and every seat was filled during his previous Lose Yourself Australian tour in 2011. He’s no stranger to selling out stadium shows in less than 30 minutes in this country.

Paul Dainty, President and CEO of TEG DAINTY said: “Eminem is a global superstar and his live shows are phenomenal, we’re proud to once again present his Australian tour”.

You do NOT wanna miss this once-in-a-lifetime opportunity to catch Eminem live! Tickets to Eminem’s Rapture Tour are on sale now from Ticketek. 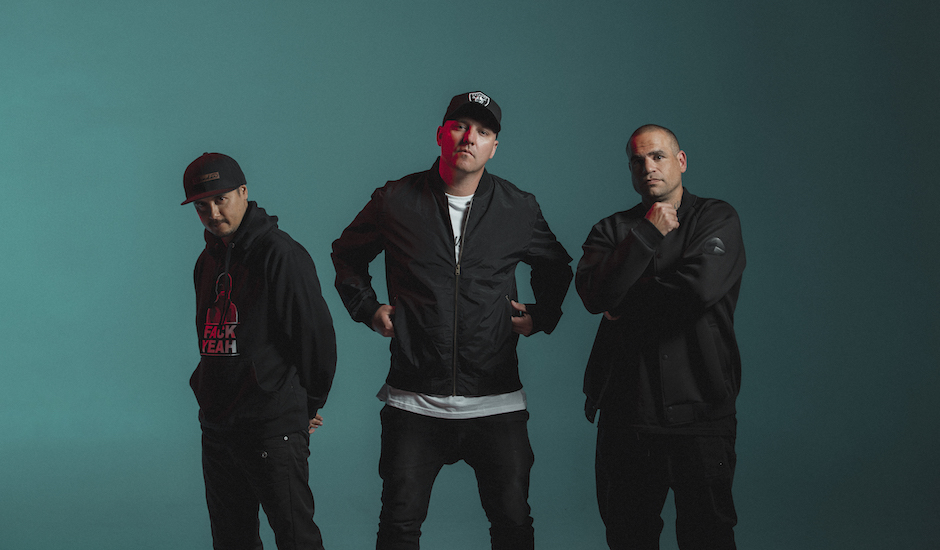 The WA hip hop heroes have a few big shows coming up to round out the year.

Last year saw the release of Perth hip hop legends Downsyde’s much-loved latest album, ClassicILL, and today we’re stoked to close out the loop by premiering the new video from its last single, Memory Lane. As the title suggests, the song is a fun, ubpeat look back on their storied 20 year career in Australia hip hop, a time that’s seen five acclaimed albums, a heap of awards, huge tours…the lot. And the video serves that time justice, featuring plenty of archival footage of the group’s good times over the past couple of decades.

You can celebrate with the fellas this Friday when they play a HUGE show at Jack Rabbit Slim’s joined by a massive cast of mates, along with a few other upcoming shows to round out the year – check out the full run below:

Esoterik aka Eso is playing his first ever headline shows this August in Sydney, Melbourne and Brisbane. Tickets go on sale on Wed 11 July @ 11:00am. They are only small venues so make sure you get in quick if you want to see ‘My Astral Plane’ live on stage! Check out all the details: http://iamesoterik.com/tour