Any old, old, issue of international kick-head bible Sneaker Freaker magazine (#22) featured a 17-page spotlight on Starter athletic wear and how it changed the sports fashion game. Today, we thought it’d be great to revisit this release as our DJ Mix of the Week! To accompany the story, Skratch Bastid made a mix featuring rap jams from Starter’s prime, 1989-1993, to be included with the magazine in physical form. It features classic & overlooked bangers from one of hip-hop’s golden eras, alongside some of the original tunes they sampled and exclusive remixes. You’ll know what’s going down from the intro.

Following the success of their ‘Nightowl’ project in 2015, G-Shock and Sneaker Freaker have joined forces once again on a collaborative project. Commemorating 35 years of G-Shock watches and 15 […]

Following the success of their ‘Nightowl’ project in 2015, G-Shock and Sneaker Freaker have joined forces once again on a collaborative project. Commemorating 35 years of G-Shock watches and 15 years of Sneaker Freaker magazine, the new ‘REDBACK’ DW5700SF-1D watch is laden with subtle conceptual flourishes and personal observation. 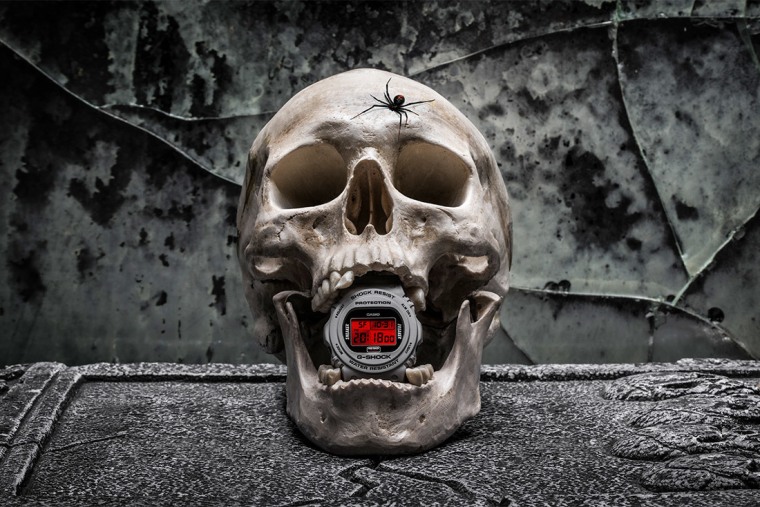 In 1983, G-SHOCK was born from Mr Kikuo Ibe’s dream to create an unbreakable watch. Over the next 35 years, relentless innovation has kept the brand at the forefront of time-keeping technology. G-Shock has grown to be a powerhouse in streetwear culture, donning the wrists of some of the world’s most influential personalities and collaborating with some of the greatest brands and designers of our time.

Established in 2002 by Simon ‘Woody’ Wood as a niche magazine catering to the underground community of footwear connoisseurs, Sneaker Freaker is an unlikely global publishing phenomenon that is proudly based in Melbourne, Australia. Known for their irreverent attitude, Sneaker Freaker has an impeccable track record of delivering idiosyncratic collaborations with brands including New Balance, adidas, PUMA and Montana Cans among others.

Turning to their antipodean roots for inspiration, Sneaker Freaker’s G-SHOCK design was inspired by one of Australia’s deadliest arachnids. The redback spider is a notorious and prolific inhabitant of outback shacks and dark suburban nooks. Despite their small stature, the female spider’s deadly neurotoxin can prove fatal to humans.

Sneaker Freaker’s founder, Simon ‘Woody’ Wood is a noted G-SHOCK collector with more than 300 watches in his keep. With product knowledge acquired over more than two decades, his aficionado affinity with the Japanese brand is highly visible in the Redback design.

“I love nerding out on the details and those red-faced ‘20th Tribute Series’ watches are some of my favourite Gs of all time. They still trade hands among collectors for big money! When the Redback concept came together, the ‘Vampire’ display just had to happen, but there were several technical hurdles to overcome. This is a highly personal nod to my love of G-SHOCK, and I’m very grateful they allowed me to use the iconic red display.”  Woody – Sneaker Freaker

The undoubted highlight is the blood-red LCD screen. Known by G-SHOCK collectors as the ‘Vampire’ display, this unique feature has only been used once, back in 2003, as part of G-SHOCK’S 20th anniversary celebrations.

Coated in ‘cool grey’ matte resin, the branding, clasp and keeper are accented in metallic black pops. Debossed with Sneaker Freaker’s logo, the backplate was also dipped in black ion plating. Flipping the two-tone strap from grey to red mimics the spider’s natural livery, while a spindly cobweb was spun around the clasp, adding a subtle thematic touch to the strap.

Launching in Melbourne on the night of Halloween, the limited edition Redback is housed in custom packaging that brings coffin couture to the world of G-SHOCK. Limited tickets are available to the launch event featuring performances from Kwame, Melbourne local Kaiit, HANS DC, YO! Mafia and special guests.

As an added bonus, STANCE was also tapped to contribute their creativity to the project. Known for their ground-breaking approach to sock construction, STANCE supplied a pair of their high-tech Ventron socks to the Redback ensemble.

RELEASE DETAILS
The Sneaker Freaker x G-SHOCK ‘Redback’ DW5700SF-1D will be released in limited numbers with the custom coffin packaging from sneakerfreaker.com on November 1 and then the rest of Australia the following day.

Global G-SHOCK retailers will sell the watch in standard packaging from November 8.